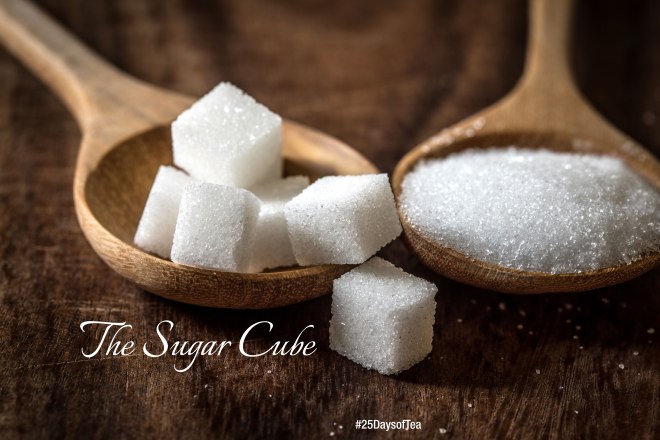 “Ecstasy is a glassful of tea and a piece of sugar in the mouth.”

The tradition of tea and sugar is fascinating and one I wasn’t familiar with. Many Russian and Eastern European Jewish immigrants drank their tea by sipping it from glasses through a piece of sugar held between the teeth.  It’s even mentioned by Dostoevsky in Crime and Punishment, as “sucking tea …through the sugar.”

Evidently many Russian Jews also practiced the Flaming Tea Ceremony during the “Festival of Lights” with each person dipping a cube of sugar into brandy and placing it on a teaspoon. Each person stands in line with their alcohol-soaked cube and its set on fire creating a glow. Holiday songs are sung and then one by one, each person drops their flaming cube of sugar into a glass of tea.

The importance of the sugar cube with tea isn’t limited to holidays like Hanukkah either. Evidently its been addressed by religious authorities and according to the Orthodox Union’s Web site, it discusses what is or isn’t permitted to eat or drink before davening (prayer) on Sabbath morning and that putting a sugar cube in the mouth is actually permitted. I just read recently a story told by the late Joseph Murphy, a former chancellor of the City University of New York about drinking tea through a sugar cube:

“Wanting to emulate the older man, little Joseph, on his grandfather’s lap, asked for a piece of sugar. The grandfather invited him to share the piece held between his own teeth, and cautioned him to take no more than half. In this way, [Murphy said], he was taught a lesson in tea drinking, a lesson in kissing and a lesson in yoysher (fairness), all at the same time.”

Regardless of the tradition (The English and Afternoon tea; The Japanese Tea Ceremony; Chinese/Taiwanese Gong Fu style of drinking tea; The Flaming Sugar Tradition) tea drinking is a way to connect, share and communicate. It offers a time of reflection with oneself and others.

That said, there couldn’t be better tea to feature today on Day 7 than Russian Caravan. I featured this in 2016 and because it’s still one of our more popular black tea blends, smokey tea lovers can enjoy 25% OFF today. Just used Code TEAGIVING7 at checkout on the website.

Happy Hanukkah!
Keep the fire extinguisher nearby and Happy Sipping!
~The Chief Leaf