But first, a little about Brookland:

“Brookland evolved in the early 1870s, when the Baltimore and Ohio Railroad ran its western branch line through this area. The rail line was situated alongside a fine 1840 Greek Revival farmhouse known as the Brooks Mansion, home of Colonel Jehiel Brooks. In the late 1880s, Catholic University was established just north of Colonel Brooks’ farm. Developers quickly responded, creating a new Washington neighborhood beyond the central city and taking its name from Colonel Brooks. The university provided a centerpiece for a large number of Catholic institutions.

In the early days, Brookland, with its single-family, wood-frame houses in styles ranging from Queen Anne to Craftsman – attracted government workers, Smithsonian Institution scientists, and people of many ethnic backgrounds who shared the Catholic faith. In the 1930s, Brookland attracted affluent African Americans looking for an area that was not restricted to whites only. Of particular note are 13 International style houses designed by Hilyard Robinson and Howard H. Mackey, two of Washington’s most prominent African American architects of the era. Robinson was responsible for the Ralph Bunche house, 1510 Jackson Street, NE, built for the Nobel Peace Prize winner.

Many other prominent black Washingtonians made their home here, including the entertainer Pearl Bailey, the poet Sterling Brown, Housing and Urban Development Secretary Robert Weaver, Senator Edward Brooke, and historian Rayford Logan. Brookland enjoys an interesting history of civic activism. Most recently it rescued the Brooks Mansion, which still stands near the Brookland Metro station, a symbol of this community and its heritage.”

This neighborhood is located in the Northeast section of DC and is known informally as “Little Rome” due to the influence of the Catholic Church and home to Basilica of the National Shrine of the Immaculate Conception.

I first discovered this little enclave back in 2003 – a hidden gem, devoid of trend and pretension. I loved the diversity of people, the loving warm-hearted neighbors, the chirping birds, the stunning green spaces with gardens galore – and the gorgeous refuge of the Franciscan Monastery where you often see a Monk or Nun strolling in deep contemplation and reflection. A quiet walk through the rose garden instantly infuses a sense of peace and puts all things in perfect perspective. As a member of the Franciscan Garden Guild, I’ve spent time in the greenhouse, helping with the famous yearly Plant Sale and even learned how to extract honey from the bees they keep.

My neighborhood has inspired me in so many ways – mostly notably with the profound friendships I’ve made living here that have touched and warmed my heart – specifically my good friend Bill. He is no longer with us, but I had the privilege of being his next door neighbor for 14 years.  We had a lot of fun during those years and he taught me a thing or 10 about everything from how to install a light fixture to how to navigate some of life’s steeper slopes. It was a joyful friendship and one I deeply cherish. It’s also why I wanted to create a blend that reflected and honored that special friendship – which was born right here in Brookland.

Bill was a Deacon in his Church; He loved roses, and chewing on lemon grass and good ole’ fashioned ginger root. The Brookland Healing Heart Tonic is a blend of  those 3 ingredients and is totally caffeine free, healing, and heart warming. Besides the emotional healing benefits of this tisane, there are also many actual health benefits to this wellness tonic: 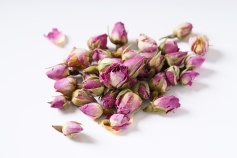 Rose:
• Naturally uplifting (especially for those prone to feeling down or depressed)
• Regulates hormone levels (how the neurotransmitters in our brain are regulated)
• Can help to improve liver function and increase urination (natural diuretic)
• Releases toxins from the body
• Good source of Vitamin C (improves immunity)
• May also help treat arthritis, menstrual cramps, cold/flu, digestive issues, and insomnia

Lemon grass:
• Traditionally used to help control and normalize heart rate and for high blood pressure.
• Used for the treatment of depression and anxiety
• Anti-bacterial and Anti-fungal
• Loaded with Vitamin C (improves immunity)
• Citral is the active constituent and lemon grass has the highest concentration of it compared to any other plant in the world. Citral has antioxidant and anti-tumor properties that both benefit the brain.

Ginger:
• Anti-Inflammatory and Anti-Fungal
• Boots Immunity
• Aids digestion and relief from nausea
• Improves heart disease risk factors
• May lower Cholesterol
• May have powerful anti-diabetic properties
• Can lead to significant reductions in LDL cholesterol and blood triglyceride level (similar extent as the cholesterol-lowering drug atorvastatin)
• Studies show its effective at reducing symptoms of osteoarthritis
• Can protect against age-related damage to the brain (Alzheimers) and can also improve brain function in elderly women